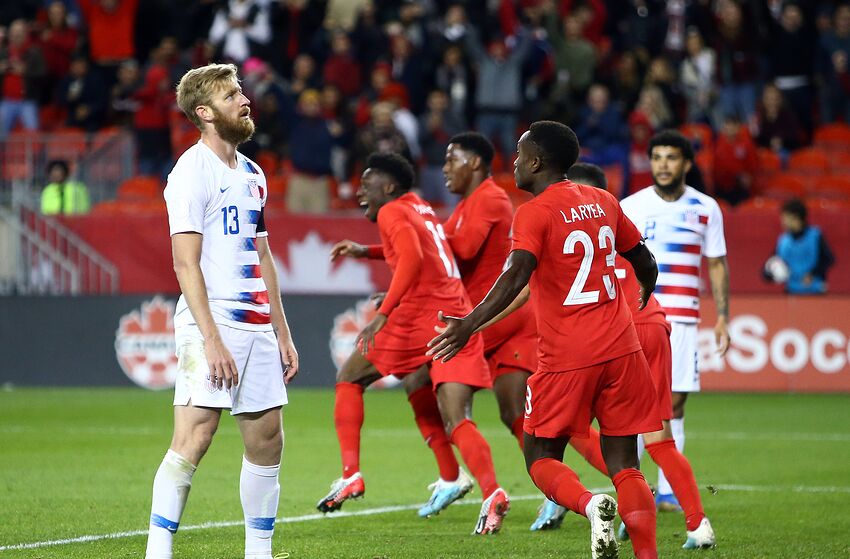 TORONTO, ON - OCTOBER 15: Tim Ream #13 of the United States looks on as Alphonso Davies #12 of Canada celebrates a goal with teammates during a CONCACAF Nations League game at BMO Field on October 15, 2019 in Toronto, Canada. (Photo by Vaughn Ridley/Getty Images)

Canada are set to miss out on World Cup qualifying. The Hex, as it is commonly known, is a terrible system, one that the USMNT and Canada must deal with.

After a defeat to the U.S. Men’s National Team in the November international break left them on the outside of the CONCACAF Nations League semi-finals, the Canadian Men’s National Team now face mising out on World Cup qualifying tournament, the Hexagonal.

The Hex, as it is more commonly known, features the top-six-ranked sides in the CONCACAF region. The top three finishers in the Hex then qualify for the World Cup with the fourth-place team facing the winners of a plate competition for a spot in the intercontinental playoffs, which leads to a World Cup qualifying place.

Without digging into the details too extensively, it is very difficult for a CONCACAF team to qualify for the World Cup if they are not in the Hex. And to be in the Hex, they have to be ranked in the top six sides in the FIFA World Rankings.

This is where Canada have been screwed by the system. Their defeat to the USMNT saw them drop four places to 73rd place in the latest FIFA World Rankings. Allied with El Salvador’s rise to 69th, that sees Canada slip outside of the top six CONCACAF rankings, which they must be in in June 2020 to qualify for the Hex.

The USMNT, meanwhile, rose to 22nd in the rankings, the second-best CONCACAF team behind only Mexico. That Gregg Berhalter’s side have risen in the rankings after several poor performances and results this year tells you everything you need to know about how these rankings are calculated.

The FIFA rankings are calculated using a rather simple algorithm for a rather complicated process: points are rewarded for results with a factor applied if they are friendlies or competitive fixtures. This is where Canada have been — and will be — screwed.

Because international friendlies are both downgraded in the calculations and often against tougher opposition, given the weakness of the CONCACAF region, El Salvador benefitted from a competition like the 2017 Copa Centroamericana, in which they finished third, beating teams like Belize and Nicaragua along the way.

Canada, meanwhile, beat Martinique and Cuba in the Gold Cup group stages while losing to Mexico and Haiti. Martinique are not a recognised FIFA International State so that victory does not count towards their ranking points. Similarly, their 4-1 win over French Guyana in CONCACAF Nations League qualification also does not count.

Over the past two years, Canada have outperformed El Salvador in the CONCACAF Nations League, 2019 Gold Cup, 2018 World Cup Qualifying and 2017 Gold Cup. Quite simply, they are the superior team, but because the FIFA Rankings are contorted thanks to overly simplistic mathematics, they will now likely miss out on the Hex.

Next: USMNT: Top 3 Male Player of the Year candidates

CONCACAF qualification has been problematic for many years. The introduction of FIFA World Rankings has not helped things either. The Hex is broken, and there is no easy fix, as the USMNT and Canada are finding out.