Atlanta United: How high energy and possession dominated Philadelphia Union by Chuck Wharton
MLS: Top 3 performances from Conference semi-finals by Matt Coles
Next1 of 3Prev post
Use your ← → (arrows) to browse 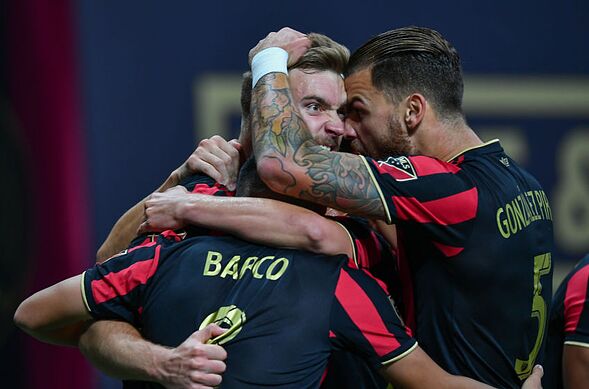 Atlanta United defeated the Philadelphia Union 2-0 on Thursday night to secure their spot in the Eastern Conference final. See what we learned.

Atlanta United will host the Eastern Conference final for the second year in a row thanks to their 2-0 win over the Philadelphia Union on Thursday night. The Five Stripes put in a solid performance on the backs of Julian Gressel and Josef Martinez while once again recording a clean sheet. Dating back to last year’s MLS Cup final, that’s now three-straight shutouts in the playoffs.

Gressel opened the scoring in just the 10th minute with a smooth chip over Union goalkeeper Andre Blake. Gonzalo Martinez, who didn’t even see the pitch in Atlanta’s previous playoff match, found Gressel with a wonderful assist. Josef Martinez then capped off the night with a rocket in the 80th minute after missing a handful of chances earlier in the game. With the win, Atlanta will host Toronto FC on October 30 for a chance to advance to their second MLS Cup final in as many years.

Here are three things we learned from Thursday night’s 2-0 victory. Without Miles Robinson and Michael Parkhurst, arguably their best two defenders, Atlanta United still found a way to win on Wednesday night against a very good Philadelphia team. That is an impressive feat by itself, but when coupled with the change in starting line-ups between playoff matches, it’s even more impressive.

Frank de Boer made a slew of changes in his starting XI for the match against Philadelphia. Without Parkhurst and Robinson, he had a choice to make: play with a back three or back four? Because of the depth at his disposal, de Boer found a way to do both. De Boer opted for Mikey Ambrose to start at left-back/left wing-back, Florentin Pogba at left center-back, and Gonzalo Martinez in midfield. Those three players replaced Justin Meram, Emerson Hyndman and Parkhurst.

Playing Ambrose in place of Meram was a huge gamble. Before Thursday night, Ambrose’s last minutes with the first team came on July 7 in a 3-3 draw to the New York Red Bulls. Playing Martinez was also a huge surprise because the Argentine midfielder never even saw the pitch against New England. Conversely, Meram didn’t see the pitch against Philadelphia despite starting against New England. Rotation was all over the pitch, and yet it did not seem to matter.

Because of the team’s play and the end result, de Boer’s decisions were clearly the right ones. He made a few mistakes over the course of the season and the Atlanta supporters are still working to trust his decisions, but Thursday showed that de Boer made the correct line-up choices and substitutions.

Next: 2. Another clean sheet
Next1 of 3Prev post
Use your ← → (arrows) to browse
Load Comments
Event Tickets
Powered by StubHub